Sephiroth is the embodiment of Cloud’s dark side. He is voiced by Lance Bass in Kingdom Hearts, Toshiyuki Morikawa in the Japanese version of Kingdom Hearts II, and by George Newbern in the English version. He is regarded as one of the most powerful of all villains in the Kingdom Hearts series (though he is only an option to duel in Kingdom Hearts and is concerned only with Cloud in Kingdom Hearts II), and Sora has to be at a relatively high level in order to survive Sephiroth’s attacks.

He, along with Cloud, Tifa, Aerith, Yuffie and Cid, comes originally from the Square game Final Fantasy VII. It has been implied by some fans of Kingdom Hearts that in Kingdom Hearts II, along with several words from the angel himself, Sephiroth might be some dark version of Cloud. This subplot so far hasn’t been touched though it might be shown in future games.

Once known as the greatest of swordsmen, his whereabouts have been unknown for some time. He challenged Sora to a one-on-one duel. No one knows why he has suddenly returned. Apparently, he and Cloud have crossed paths before.

An unsurpassed swordsman who was once revered as a hero.

For a long time Sephiroth’s whereabouts were unknown, and no one can say for sure why he has returned.

He seems to have some connection to Cloud’s past.

During the Platinum Match, at Olympus Coliseum, Sephiroth appears and fights Sora. He is a secret boss available in all but the regular Japanese version. After being defeated by Sora, Cloud finally meets Sephiroth. Sephiroth implores Cloud to turn to the darkness, which Cloud refuses. The two engage in a high-speed battle in the air, the outcome of which is unknown.

Right before the invasion of Hollow Bastion, Cloud warns Sora and company about Sephiroth, and his ways of the darkness. Later, as Sora exits the castle to go help defend against the invasion, Sephiroth appears. He asks about Cloud’s whereabouts, but Sora doesn’t answer, though he and his friends reveal that Cloud realizes that Sephiroth is the manifestation of Cloud’s darkness. Seeing that Cloud is becoming enlightened and desires to fight him, Sephiroth takes his leave. 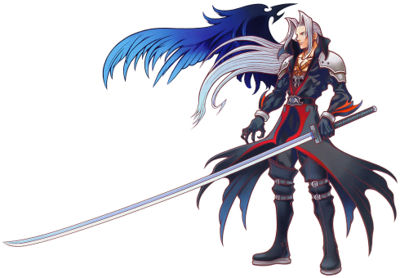