Shan-Yu is a villain from Kingdom Hearts II. He originates from Disney’s Mulan.

Leader of the Huns. He wants to take over all of China.

Shan-Yu and his enormous army are fearsome fighters who have defeated some of the Emperor’s best troops. Now Shan-Yu plans to use the Heartless to invade the Empire.

Shan-Yu has fierce eyes, and is always seen with a hawk who serves as his eyes and ears from above.

Shan-Yu is the leader of the Hun army, and plans to attack and take over China (The Land of Dragons).He is large and burly, and wields a blade with zigzag shaped edges. His eyes and ears over China is his pet falcon, Hayabusa. Hayabusa appears as an ominous warning to others that Shan-Yu and his army are approaching.

Shan-Yu appears in Kingdom Hearts II as the main antagonist of The Land of Dragons. Instead of Huns, he possesses an army of Heartless at his command. The story follows the movie for the most part, except the shadow of the Heartless has possessed him.

After surviving the avalanche as in the movie, He attacks the Imperial palace (though this time, there is no celebration), but is defeated by Sora, Donald, Goofy and Fa Mulan in a climatic boss battle. After you beat him, you receive the Hidden Dragon keyblade. 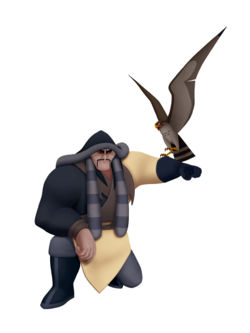