Simba is a recurring character in the Kingdom Hearts series, serving as a Summon in the first game and an ally in the second. He is originally from Disney’s “The Lion King”.

The leader of the pride. He rules over the other animals of the Pride Lands, his savanna kingdom.

Hold down the X button to charge up his power. When the command changes to Proud Roar release the button to unleash the attack. Hold the button down longer for more power. Cost: 2 MP

Successor to his father as ruler of the Pride Lands.

Sora need only call and Simba will appear and lend his strength.

Son of the great Mufasa who grew up to succeed his father and rule the Pride Lands.

As a young cub, Simba mistakenly thought he was responsible for his father’s death. He left the Pride Lands and met two new friends: Timon and Pumbaa. They taught him to lead a carefree life.

During their first quest, Simba helped Sora, Donald, and Goofy whenever they called on him. 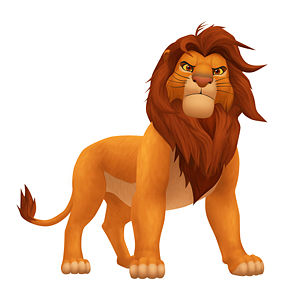