Snow White is an original character from the 1937 Disney animated movie, Snow White and the Seven Dwarfs. She is one of the Princesses of Heart whose heart was required to open the final door in Kingdom Hearts.

A beautiful princess, gentle and pure as snow. She is one of the princesses needed to open the final Keyhole, and was captured by the Heartless. Her world has already been swallowed by the darkness.

The fair-skinned princess first appeared in “Snow White and the Seven Dwarves” (1937).

Being jealous of her beauty, the Evil Queen sends out her personal assassin and orders him to bring Snow White into the forest and eliminate her. Unable to bear with killing such a beautiful princess, he warns her to run for the hills and never come back. As she escapes into the forest, she meets seven dwarfs and settles down in their house.

Snow White’s world was destroyed by Maleficent. She was one of the first princesses to be captured and taken to Hollow Bastion.

In the game, if Sora seals the keyhole of Deep Jungle before sealing the one of Wonderland, Snow White is set to appear in front of the Disney villains instead of Alice. This may indicate she was the 4th Princess captured with Alice being 5th, Jasmine 6th and Kairi last.

When the darkness of the keyhole from Hollow Bastion spread throughout the world, Snow White and the other five princesses used their power to shield it inside in order to keep it from spreading throughout the universe.

When Kingdom Hearts was sealed she was returned to her own world.

Although she did not appear in the game, Snow White’s name was part of the password that allowed access to the DTD dataspace in Tron’s world. 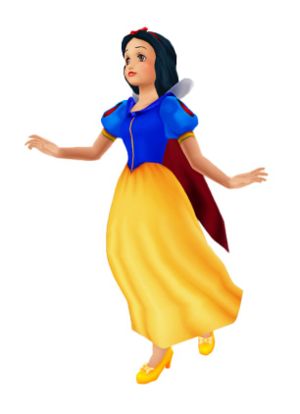