“I’ve been having these weird thoughts lately…like, is any of this for real… or not?”

Sora is the hero and main protagonist of the Kingdom Hearts series. Sora is voiced by Haley Joel Osment in the English versions and Miyu Irino in the Japanese versions. He is an upbeat teenager who may seem simple minded at times, but realizes the importance of his quest. He possesses a strong sense of justice and an unrelenting heart. At times, he is impulsive and quick to anger, but he is always sincere about what he says and does.

Sora is fourteen years old at the beginning of Kingdom Hearts and lives on Destiny Islands with his best friends Riku and Kairi, and others including Selphie, Tidus, and Wakka. Sora, Riku, and Kairi wish to escape from the Destiny Islands, and find out what lies beyond. On the night before they leave a huge storm comes. The storm turns out to be the Heartless destroying the heart of the world.

His name is derived from the Japanese word for sky.

A spirited youth. He was cast into an unknown world when a swarm of Heartless raided his island. He battles the Heartless with a mysterious weapon called the Keyblade as he searches for his friend Kairi.

The one who fights the Heartless. Upon reclaiming the Keyblade from his rival Riku, Sora sacrificed his heart to save Kairi and became a Heartless. Kairi’s deep feelings for Sora restored him. Now he must confront Ansem, the seeker of darkness.

A bright and spirited boy chosen by the Keyblade to battle the Heartless.

It was Sora who defeated Ansem, ending his plan to shroud the world in darkness.

However, Sora continued his journey, seeking the friends he lost during the struggle.

Riku’s boyhood friend, and the hero of light chosen by the Keyblade to stand against the darkness. 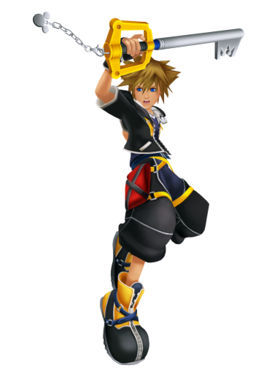