Tarzan is a party member in Kingdom Hearts.

He is a wild, almost animal-like man who has been raised by gorillas since birth. He speaks little English and mostly gorilla language which is a combination of grunts and hoots. Because of his long time in Deep Jungle, he has developed rather impressive acrobatic skills similar to the movements to a monkey, and he even can “surf” down tree branches and vines, as well as using vines to swing across great distances. He fights with a spear made from a sharp rock tied to a branch.

A young man raised from infancy by gorillas. His gorilla “mother” is Kala. Tarzan spoke only the language of the apes until he met Jane. Since then he’s learning to speak English at an astonishing rate.

Tarzan first encounters Sora in his former treehouse home, being attacked by the leopard Sabor. Tarzan managed to chase off Sabor and became friends with Sora, through a difficult conversation due to Tarzan’s limited vocabulary. Sora asks for Tarzan’s help to locate Riku and Kairi, although Tarzan doesn’t really understand. He leads Sora through the jungle’s depths to an encampment where Sora meets Tarzan’s friend, Jane, who is surprised to see Sora. Clayton, a hunter whom Jane brought to the jungle, attempts yet again to perusade Tarzan to show them the location the gorillas. Tarzan, however, cannot do it as the leader of the gorillas, Kerchak, is distrustful of the humans. At this point, Clayton has his heart taken by the Heartless and he falls into darkness. Sabor attacks Sora and Tarzan again, but they kill him.

Jane and Terk are briefly kidnapped by Clayton, but are saved shortly after by the Keyblade bearer. Unfortunately, Clayton and his gang of Heartless have now captured all the gorillas so that Clayton can shoot them. Sora and Tarzan intervene and the gorillas escape. Clayton and a large Heartless named Stealth Sneak fight Sora, Tarzan, Donald and Goofy, but they are defeated (Clayton being crushed by the Heartless). Grateful for their rescue, the gorillas show Sora and the others the location of the world’s Keyhole. Jane then figures out what Tarzan’s continuous grunting means: Friends in the heart (the word heart is subtitled in punctuation symbols).

Tarzan is a heavily physical character. His spear has long reach and high strength. He uses his spear in tandem with a variety of special techniques, attacking enemies rapidly in battles, although he runs out of MP for these special attacks quickly. He only has one equipment slot and three item slots. Tarzan’s abilities are as follows: 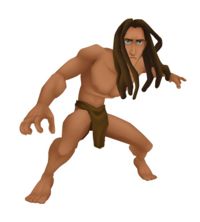 Title
tarzan and jane disney full movie in english watch online
Description
This is my Instagram link for any purposes: https://instagram.com/dailymotive_1...