Terk is a female gorilla who lives in Deep Jungle. She appears in Kingdom Hearts. Terk is Tarzan’s best friend and possible cousin. She is very mischevious but at times has “emotional constipations”.

A young female gorilla, and Tarzan’s close friend. She is protective of the other young gorillas and acts as their leader. Unlike the other gorillas, her curiosity about humans is greater than her fear of them.

Terk has a minor role in the game. She lives in Deep Jungle. Terk is frightened upon coming face-to-face with Donald. Terk drops a Gummi Block which is picked up by Donald. Terk later flees from the Heartless and runs into Jane. Terk helps save her from the Heartless. When Clayton imprisons Jane in the treetops, Terk is by her side. Terk is almost shot dead by Clayton while she is playing in the Tree House (Clayton defended himself by saying that he shot a snake that slithered by).

After the defeat of Clayton, Terk witnesses Sora sealing the Keyhole. She seems to develop a soft spot for Donald and hugs him, but he protests, worried about what Daisy might say or do. 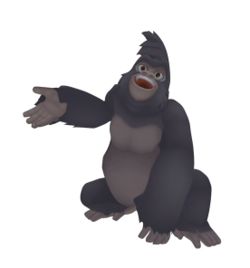