The Peddler is a mysterious salesman, who is always looking out for his best interest. Whether he’s trying to sell something or letting Jafar out of his lamp, you can count on two things: He’s up to no good, and he’s making a profit! His first appearence was on Disney’s “Aladdin”.

He runs a shop offering all kinds of merchandise. There’s definitely something suspicious about this fellow, though.

In the first game, the Peddler shows up on occasion inside Aladdin’s house running a shop and hiding from the Heartless that are overruning the city.

The Peddler has a more important role story-wise in Kingdom Hearts II game. During the first visit, he is seen chasing after Aladdin and Abu. According to Aladdin, Abu stole a lamp from the Peddler. After the lamp’s return, Iago recognizes it as Jafar’s lamp, saying he’d never mistake it. Returning to the Peddler’s shop, Sora and friends try to purchase the lamp, but the Peddler’s price is “a treasure fit for a sultan”. Aladdin knows he can’t just go to the palace asking for treasure, so Iago suggests another place: The Cave of Wonders. After traversing the desert, and overcoming the traps inside the cave, the gang returns to the shop with a beautiful gold statue adorned with priceless gems. However, they find the shop empty. Suddenly, they hear two voices outside: The Peddler and Pete. Running outside, Sora and friends find the Peddler being chased by Pete, who attempts to snatch the lamp, intending to release Jafar and turn him into a Heartless. The chase continues into the palace grounds, where Iago joins in by swooping down and scooping up the lamp in his beak, but crashes into a wall. After Sora and friends defeat Volcanic Lord and Blizzard Lord, they purchase the lamp, sealing it away deep inside the palace.

On the second visit to Agrabah, Sora, Donald, and Goofy beam down from the Gummi Ship into the Peddler’s shop. It has changed much now; it is filled to the brim with treasure. Suddenly, Aladdin bursts in, yelling about how the Peddler had let Jafar out of the lamp. When Sora looks back, the Peddler has vanished. He is next seen in front of the palace after Sora and the gang return from Jafar’s trap at the desert ruins. They interrogate him, causing him to spill the beans: He had snuck into the palace to “borrow” some loot, when Jafar telepathically called to him, tricking the Peddler into releasing him. Some time later, the Peddler met with a man in a black coat (Organization XIII), who paid him in treasure to keep quiet about Jafar, claiming he’d get rid of him after Jafar became a Heartless. As the Peddler puts it, “It would have been a successful transaction if I hadn’t been seen…” 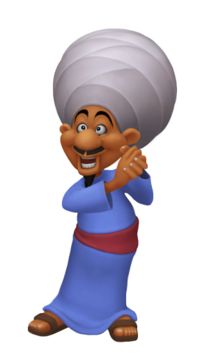