The Wardrobe is a character from Beast’s Castle. She is the first to tell Sora, Donald and Goofy about the spell put on the castle, the servants and how the Beast was a prince. She askes for Sora to rescue her friends in the Dungeon and will tell them more of the story of the castle when they return. After Sora moves her from blocking the Undercroft door, she moves to Belle’s Room and stay there. She also says that she would like to be changed back into a human but has gotten to like her current form.

In the ending credits of Kingdom Hearts II, it is shown that Beast has returned to human form which means that the Wardrobe has changed back as well.

The castle’s lady’s maid. She became a wardrobe when an enchantress put a spell on the castle. 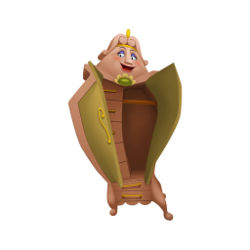