A young woman in search of a certain someone.

Her journey won’t be over until she finds the person she seeks.

Tifa appears during one of Sora’s visits to Hollow Bastion in Kingdom Hearts II, inspecting Ansem the Wise’s study, looking for “a guy with spiky hair,” but not elaborating any further.

The person she’s looking for turns out to be Cloud, and she almost catches up to him during the Heartless invasion, but he chases after Sephiroth, leaving her fight a large group of Heartless on her own. She is later the third person to fight alongside Sora in the Ravine Trail, preceeded by Yuffie and Leon, and followed by Cloud.

If Sora wins the optional Sephiroth boss fight, he can find Cloud and tell him that Sephiroth is waiting for their battle. It is as this confrontation with Sephiroth reaches its climax that Tifa finally catches up to Cloud. She tries to help Cloud, saying that all that needs to be done is to surround him in light, and telling Sephiroth that the darkness will always be there, but in a place that he can’t reach. She fights with Sephiroth very briefly, then gives Cloud the light to overcome his darkness, after which the two men return to battle and disappear once again, leaving her to continue the pursuit.

After this, Tifa will give Sora Fenrir Keyblade. Cloud and Sephiroth are the only Final Fantasy VII characters she interacts with, as she never meets with Aerith, Yuffie, or Cid. Although she appears in Hollow Bastion/Radiant Garden, it is deliberately ambiguous as to whether she lives there or not, as well as if she is a human or something else.

She possesses the same tremendous strength she did in Final Fantasy VII, easily capable of high level martial arts such as lifting a gigantic portrait of Xehanort, and kicking a wall hard enough to shake a whole room (her high physical strength being displayed in a comical way is a small running gag). 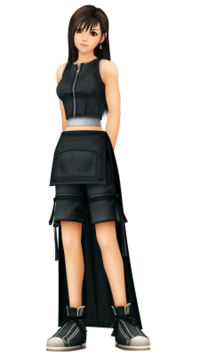