Tigger is a friend in the 100 Acre Wood. He made his first appearance in Kingdom Hearts, alongside with Roo to train Sora how to “jump”, which requires jumping on a specific tree coordinate and reach to the finish line. Tigger mostly uses Rabbit’s farm as a jumping spot, therefore ruining his vegetables, much to Rabbit’s chagrin.

Tigger’s original voice actor, Paul Winchell, was already long retired even before the Kingdom Hearts series was conceptualized and did not reprise the role, all the more in II as he had already died in the time period between the releases of Kingdom Hearts and Kingdom Hearts II. Tigger is instead voiced in both games by Jim Cummings, his current official voice-actor, who also in the games voices Winnie the Pooh, Pete and others.

Tigger loves to bounce more than anything. Sometimes his bouncing gets out of hand, but he doesn’t mean any harm. Beneath that happy-go-lucky exterior beats a sensitive, gentle heart.

He bounced onto the scene in “Winnie the Pooh and the Blustery Day” (1968).

The one and only. Cheerful Tigger loves to bounce all day long.

Sometimes his energy is too much for the others, but he always means well.

Tigger sure is energetic. He loves to use his tail to bounce all over the Hundred Acre Wood. Sometimes his bouncing gets to be a bit much, but he doesn’t mean any harm. Underneath that happy-go-lucky exterior, there’s a sensitive, gentle heart.

In Kingdom Hearts, the mini-game with Tigger takes place in Rabbit’s House; Sora is required to block Tigger from jumping on Rabbit’s crops. If Tigger does jump on Sora’s head or shoulders, Sora earns points. There is a “Rush” function at the bottom of the command menu, which enables Sora to get to Tigger on time (i.e. before he jumps on Rabbit’s crops and pushes them down).

The Kingdom Hearts II mini-game involves Tigger and Roo, and it also takes place in Rabbit’s House. This game also involves bouncing, but this time, Sora is required to bounce on rows and rows of balloons. Each balloon, if burst, gives Sora a number of points (in the form of yellow orbs). 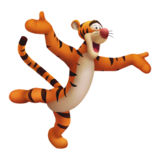