Tinker Bell is the little fairy who lives in Neverland alongside her best-friend, Peter Pan. She is originally from Disney’s “Peter Pan”.

The little pixie of Neverland. She’s Peter Pan’s loyal partner, but she has a short fuse, and she’s very jealous of any girl who gets near Peter. With a little of her pixie dust, you can fly… if you believe.

The little pixie from Neverland. Peter pan asked her to accompany Sora and friends on their quest, but she’s anxious to see Peter. She can restore party’s HP, and prevents Sora from being defeated, though only once. Cost: 3 MP

A fairy with a jealous streak, especially when Peter pays attention to other girls.

Tinker Bell is introduced to Sora, Donald and Goofy when they meet Peter Pan in the hold of Captain Hook’s galleon. Tinker Bell informs Peter that she has located Wendy (she, however, has a deep jealousy for Wendy, due to her growing relationship with Peter). Tinker Bell later sprinkles the trio with her pixie dust for later use of flight. Peter rescues Wendy and flies off somewhere, leaving Tinker Bell and the others to fight for themselves.

Tinker Bell is then captured by Hook and held hostage in a lantern – her life or the Keyblade is Hook’s demand. Sora walks the plank instead and flies thanks to happy thoughts. Peter returns and saves Tinker Bell from Smee. After Captain Hook takes the plunge and is defeated, Tinker Bell reappears and tells Peter of something happening at the clock tower in London. They go to the clock tower (Big Ben) in London where Sora seals the Keyhole. Tinker Bell seems to approve of Peter and Wendy’s friendship at last and Peter asks Sora to take Tinker Bell with him as an ally. Tinker Bell is delighted to go with Sora as a summon.

If one returns to Neverland, Tinker Bell tells Sora and Peter of the Phantom Heartless at the clock tower.

Tinker Bell from Sora’s memories appears in the Neverland floor in Castle Oblivion. Tinker Bell is first seen in the beginning when Sora, Donald, and Goofy entered Captain Hook’s ship. She took the three to see Peter Pan to help him find Wendy on the ship. After the fight with Captain Hook, Tinker Bell sees Sora and the others and gives them her summon card. 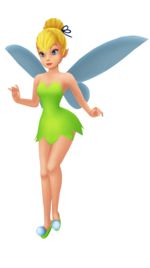