Tron is a party member and the protagonist of Space Paranoids, based on the 1982 Disney film Tron. He is a security program who works to stop the MCP and Sark from destroying Hollow Bastion with their army of digitized Heartless. He becomes good friends with Sora, Donald and Goofy. He appears in Kingdom Hearts II and is considered the most important Disney character in the game behind the primary ones (Donald, Goofy, King Mickey, Maleficent, Pete). Unlike his movie counterpart, Tron speaks as if he had never experienced human life or emotions, contrary to having a fleshy form that was digitized into the virtual world. However, his time with Sora, Donald and Goofy introduces those concepts to him, and he eventually embraces them wholly.

As in the movie, he is voiced by Bruce Boxleitner.

A security program created by a computer user to watch the MCP.

Tron is very dedicated, and he’ll do just about anything for his user.

A security program that was improved and upgraded by Ansem the Wise. He’s the fellow who also reprogrammed the MCP. Tron is dedicated to making sure the system functions correctly, but the MCP wants to take control away from the users.

Only Ansem knows why these two programs behave so differently.

Tron meets Sora, Donald and Goofy while trapped in a Pit Cell with them in the mainframe of Ansem the Wise’s computer. After escaping the cell and enabling access back to the real world, the four companions proceed to find a way to unlock the D.T.D (Door to Darkness). After activating a power core, Tron sends Sora and the others back to Hollow Bastion to locate the password required to access the DTD. They locate the password behind a large painting of Xehanort (thanks to Tifa moving it aside), the password being the seven names of the Princesses of Heart. Tron hacks into the D.T.D and changes the password to Sora, Donald and Goofy, to bide himself time before the MCP attacks again. Sora, Tron and the others reach the I/O Tower where they fight a Hostile Program, which is defeated.

Tron reveals to the three that Ansem is his user (although which Ansem it is remains a mystery). He also explains Ansem rebooted the MCP, suggesting “Ansem” to be Xehanort. During the group’s return visit to the mainframe, Tron has been forced onto the Game Grid to fight for his life, while Hollow Bastion is being overrun by digitized Heartless by the corrupted town defense mechanism. Sora and the others save Tron and he learns all the Hollow Bastion residents are supporting him. Tron receives an Eradicator program to delete the MCP. Using the Solar Sailer vehicle to reach the core of the mainframe, Tron, Sora, Donald and Goofy battle an upgraded Sark and the MCP. The MCP is eventually deleted and Sark dies with him. Tron is overjoyed and shows off his “funny side” to his friends, who he hugs in a term of goodbye, before jumping into the core to take over the MCP’s programming. He locates old footage of Hollow Bastion when it was first built and revealed its former name: Radiant Garden. Tron is seen in the credits with a new dancing program, that Sora created. 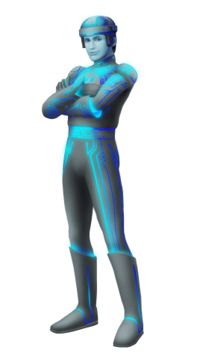