Ursula is a Sea Witch who is always trying to take control of Atlantica.

Classified as an “octopod,” she is an obese purple witch that was once a senior member of King Triton’s court. However, she was banished for her love of Black Magic. Ursula has two pet eels, Flotsam and Jetsam, whom she refers to as her “poopsies”. She first appeared in Disney’s “The Little Mermaid”.

An evil sea witch living in a vast cave far from the palace. Has the power to grant wishes, but in return demands a heavy sacrifice. She’s trying to oust Triton and take over Atlantica.

She deceived Ariel and stole the trident to take over Atlantica. Using its power, she became an enormous monster and battled Sora, Goofy and Donald.

The sea witch. She once lived in the palace, but was banished for scheming.

Ursula deceived Ariel and stole the trident in an attempt to rule all Atlantica.

The sea witch who plotted to rule all of the undersea kingdom Atlantica.

Ursula appeared before Riku as a token of the indelible darkness in his heart. 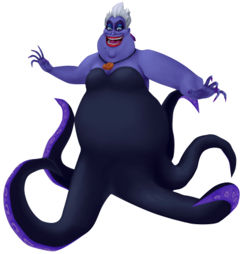