In the simulated Twilight Town, Vivi enters the Struggle competition at the beginning of Kingdom Hearts II. His data soon became possessed by a Nobody and he gains incredible powers. He easily defeats Seifer with his fast movement speed and Roxas must battle him. After he is defeated, time will freeze and Vivi’s data will reveal its true form to be a Dusk. After the Dusk is defeated, the real Vivi appears, wondering how he got here. Roxas later fights fourteen Vivis (created by Nobodies hacking the system) in a tunnel. After that Vivi will be seen with Seifer for the rest of the game.

The oddity of his Struggle battle (such as his enlarging his Struggle club) may be a homage to the Black Magic that he uses in Final Fantasy IX. Furthermore, the fact that he is used by the Nobodies (non-existent beings) is also a blatant reference to his original Final Fantasy incarnation, who was driven to find the meaning of his own existence.

Unlike the rest of Seifer’s group, Vivi doesn’t dislike Roxas and the others and is even quite friendly to them, always speaking in a polite tone and even offering Roxas his Struggle club when he was done training.

In battle he can use many techniques. He can use his club to hammer down on his opponent with lightning speed. He can magically float in the air. He can use “Haste” where he does three very fast rising magic attacks. Finally he can cast “Flare” where he enlarges his club and does many spinning hits with his club that ends with a powerful magic blast. In the real Twilight town Vivi is often seen in the woods. He is the one that informs Sora that Seifer is attacked by Nobodies.

A boy who lives in Twilight Town. It’s not so much that he follows Seifer. But he’s so meek he does whatever he’s told anyway, and usually gets stuck with the chores.

In spite of all that, Vivi likes Seifer and admires his strength. 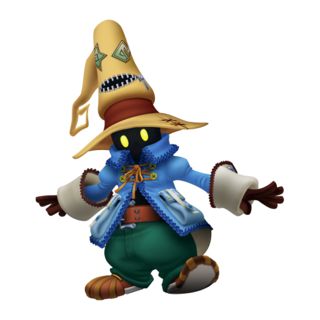