Wakka is a minor character in the Kingdom Hearts series, originally from Final Fantasy X.

A boy who lived on the Destiny Islands. He looks out for Tidus and Selphie like a big brother. Nobody knows what happened to him after his island disappeared.

A boy from Sora’s islands.

Despite being the oldest, Wakka is modest and takes good care of his friends.

Wakka is a resident of the Destiny Islands and a friend of Sora, Kairi, and Riku. He spends a lot of time with Tidus and Selphie, and treats them just as a big brother would. He and Tidus expressed their curiosity over the Secret Place, and were thinking of exploring it.

He can be fought while on Destiny Islands. He uses his Blitzball to attack as he did in Final Fantasy X (thus requiring the player to deflect Wakka’s Blitzball back at him), but this one lacking the bumps and Spiran script for the word “blitzball” of the original Blitzball. Nevertheless, this makes him, out of all the Destiny Islands and Twilight Town Final Fantasy characters, the only one to use the exact same weapon as his original incarnation.

Wakka makes no appearance in Kingdom Hearts II, just as Tidus doesn’t. The two are only briefly mentioned by Selphie when she is talking to Kairi early on in the game, described as being “wrapped up in their ball game.” (a reference to Blitzball from Final Fantasy X)

Like in Final Fantasy X, Wakka fights by throwing blitzball. 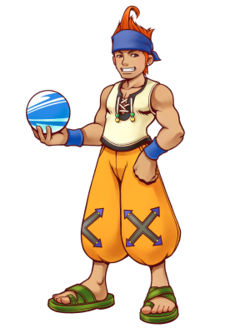