Wendy first appears in Neverland and is believed to be a Princess of Heart by Captain Hook, until Riku remarks that she isn’t. After Peter Pan takes her to the Clock Tower in London, she waits for him and Sora and co. until they finally reach the tower and Sora seals the Keyhole hidden in it. Then Peter and Wendy say goodbye to each other, but also promise that they will meet again as long as they don’t forget each other. Wendy’s fate after the appearence of the Phantom is unknown.

Kathryn Beaumont the original voice actress reprises the role of Wendy and even Alice.

A dreamy girl whose wish to visit Neverland came true. Peter Pan showed her the way, but she got caught up in Hook’s vendetta against Peter, and was kidnapped by Hook.

A dreamy English girl. Peter showed her the way to Never Land.

She also appears in Kingdom Hearts: Chain of Memories as a fragment of Sora’s memories, however, the reason to her capture was never explained. In Kingdom Hearts: Chain of Memories, after Peter Pan rescues her, she tells him she wants to go home. Peter is angered by this, believing as an adult, Wendy will forget about him, and leaves her to rescue herself. Sora tells Wendy to wait for them to come back while they scout out the area. However, once they reach the deck, they find Captain Hook has recaptured Wendy, about to make her walk the plank. Peter returns to save Wendy, and after defeating Hook, Wendy and Sora convince Peter that as long as they stay true friends, they could never forget each other. Satisfied, Peter takes Wendy home. 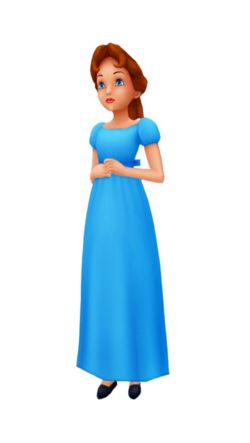