William “Will” Turner is one of the many Disney characters that Sora and co. meet on their adventures in Kingdom Hearts II. He made his first appearance in the Pirates of the Carribean trilogy serving as another major protagonist alongside Captain Jack Sparrow. He is present at the time of Kingdom Hearts II and resides in Port Royal.

A very talented swordsmith. As a boy, Will was rescued at sea after pirates burned his ship and left him to drown. About the same time he was rescued, the pirate medallion his father had given him disappeared.

Young Elizabeth Swann was aboard the ship that rescued Will, and they’ve been friends ever since. As Elizabeth’s father is governor of Port Royal, Will is a bit shy and rather formal around her.

The town is already swarmed by Heartless and cursed pirates when Elizabeth gets kidnapped.

Will joins forces with Sora, Donald, Goofy, and Jack Sparrow to rescue Elizabeth and travels to Isla De Muerta where the pirates. There, he knocks out Jack and rescues Elizabeth from Captain Barbossa.

On their way back to Port Royal Will realizes the pirates are after his blood, not Elizabeth’s. Eventually, their ship gets caught up by the Black Pearl. Will marks his name in front of the pirates and threatens to kill himself so that the curse will remain with them unless they leave Sora, Elizabeth, Donald and Goofy alone. Though Barbossa promises to leave them alone, he also leaves behind the Heartless to drown the ship.

On Isla de Muerta, Will lifts the curse with his blood and to their advantage, kills Barbossa.

Prior to the trio’s re-visit, Port Royal is once again haunted by cursed pirates (and Nobodies), so Will and his crew travel to Isla de Muerta to find out if the curse has been reawakened. However, his crew gets killed while on the island. Luckily, he makes it back to the ship just barely.

Being too worried to wait, Elizabeth travels across the ocean with Sora, Donald, Goofy, and Captain Sparrow and find Will injured. After Sora, Donald, Goofy, and Jack get blown to another ship, which is later drowned, Will and Elizabeth make it to the island of sunken ships to find them. Together, they travel around Port Royal to find the coins from the cursed Aztec treasure and return them to whence they came. 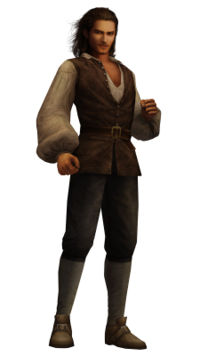