Xaldin the Whirlwind Lancer (?????, Senpu no Rokuso, lit.Whirlwind Six Lances), is Number 3 in Organization XIII, and a senior member. He appears in Kingdom Hearts II as a villain in Beast’s Castle, and spends his time in the game attempting to plunge Beast into despair in the hopes of separating his heart from his body. Xaldin wields six lances and the attribute of wind, and is one of only four Organization members whose names start with an “X”. Xaldin will be a playable character in the multiplayer gameplay of Kingdom Hearts 358/2 Days but is also seen being teamed up with Roxas in the single player.

The Organization’s motives are a string of mysteries–what could their true goal be?

Organization XIII’s Number III. He wanted the Beast’s Heartless and Nobody in order to acquire Kingdom Hearts.

In the end, however, Sora and his friends destroyed Xaldin.

Organization XIII’s Number III. He sought the Beast’s Heartless and Nobody in order to acquire Kingdom Hearts.

He was a master of wind who wielded six lances–but he met his end at the hands of Sora.

Nobodies like him are made whenever people strong of heart and mind become Heartless. The empty shell they leave behind acts of its own will.

Are they empty vessels devoid of hearts? Are they roaming spirits? Or are they simply nothing at all?

Xaldin’s first major appearance in the game is as a cloaked and hooded figure during Sora’s first visit to Beast’s Castle. At this time, Xaldin has already drained Beast of much of his hope and kindness by convincing him that Belle is plotting against him. Beast is unresponsive to Sora, Donald and Goofy when they first greet him, despite having met them before in Kingdom Hearts at Hollow Bastion. Xaldin’s slippery words cause Beast to lock himself in his chambers and refuse contact with them or Belle. 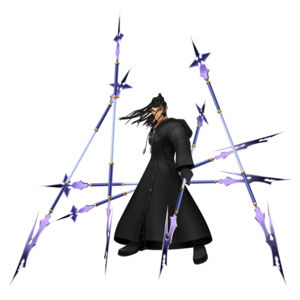