Xemnas is the Nobody of Xehanort, the superior of Organization XIII and the ruler of The World That Never Was. Despite his original name being Xehanort, he uses an anagram of his mentor’s name: Ansem, due to Xehanort stealing the name prior to discarding his heart and body. He uses the element of nothingness, and wields aerial blades. He also commands the Sorcerer Nobodies.

Xemnas will be a playable character in the multiplayer format of Kingdom Hearts 358/2 Days.

His complete being, Xehanort, may also have an appearance in Kingdom Hearts: Birth by Sleep, due to his possible connection to Aqua, whose armor resides in the Chamber of Rest (see below).

A Mysterious guy who appeared at Hollow Bastion.

Organization XIII’s Number I. He directs the group as its leader.

In truth, he is the Nobody of Xehanort, who was apprenticed to Ansem the Wise. In secret, Xehanort studied the doors and the heart of all worlds, ultimately stealing his master’s name, Ansem. When Xehanort became a Heartless, his Nobody Xemnas came into being.

Xemnas is using Sora, collecting the hearts released every time a Heartless falls to his Keyblade.

Organization XIII’s Number I, who acts as leader of the group. Xemnas is the Nobody of Ansem’s apprentice Xehanort.

He used Sora and his Keyblade to collect hearts from the Heartless and see Kingdom Hearts to its completion.

Organization XIII’s Number I. He directs the group as its leader.

Organization XIII is a unique presence among the Nobodies. They think and plan, and seem to have a greater goal. 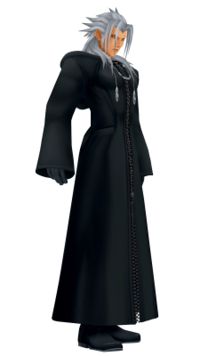 Title
Xemnas and Zexion slow dancing in Disney
Keywords
Xemnas, Zexion, Disney
Description
While at Disney, me and my friend decided to be special and dance around the str...