Xigbar the Freeshooter (?????, Madan no Ite, lit.Magic Bullet Sharpshooter), is Number 2 in Organization XIII. He is the fourth to last to be defeated and the second to speak to Sora in Kingdom Hearts II, although he does so hooded at first. Xigbar fights with two “Gun Arrows”, capable of firing many different types of shots, the most common of which are laser arrows.

In Kingdom Hearts 358/2 Days, Xigbar will be featured as a playable character in multi player mode. In an interview, Tetsuya Nomura said that “Xigbar’s attacks have a high range, but he has slow reloading time.”

Organization XIII’s Number II. When Sora called out to him, thinking he was Riku, Xigbar gave a curt reply.

His motives and his methods remain unclear. Surely he has a greater goal in mind, but what could it be?

He told Sora once that he reminded him of someone else. Puzzling words, indeed…

Some part of him did seem to be enjoying Sora’s reaction.

Organization XIII’s Number II. Nothing else about him has come to light.

He vanished, leaving Sora with naught but puzzling words. Apparently Organization members can use the darkness to come and go as they please.

Not long after arriving in Hollow Bastion and reuniting with Aerith, Leon and Yuffie, Sora engaged a number of Dusk Nobodies in battle around the city. After being led away from the main town, Sora, Goofy and Donald heard voices mocking them, but could find no source for them. After Sora demands that they show themselves, the remaining Organization members (having lost five members due to deaths and two others due to desertion) materialize, laughing. Though they are hooded, they are recognizable as the Organization from the description given to Sora and his companions by Yen Sid.

The Organization eventually departs, but Xigbar, still cloaked and hooded, stays behind to taunt Sora further, making them feel anxious about the power of the Organization. He also openly compares the similarities between a look Sora gives him and one given to him by Roxas; Sora dismisses this as random banter meant to confuse him. Xigbar then leaves, staying out of Sora’s way for a very long time.

In Sora’s second trip to the Land of Dragons, Sora tracks a black-cloaked figure into the mountains (which is really Riku). They battle, and the mysterious figure flees shortly after; suspecting that he was Riku, Sora follows him. When Sora arrives at the Emperor’s Palace, the site of his earlier battle with Shan Yu, he enters to find a man in a black cloak near the door the Throne Room. Sora calls out Riku’s name, and the man unhoods himself, stepping back from the doorway. 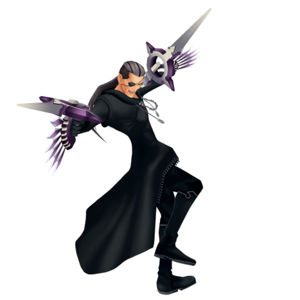