Yen Sid is a master magician who made his Disney debut in Fantasia. He appears in Kingdom Hearts II as an aid to Sora and the gang. Yen Sid is well-known for his wisdom, and his command over the arts of sorcery is such that most address him with the honorific “Master.” He was once King Mickey’s tutor, and taught him everything he knows of the arts of sorcery. His name is two separated parts of the word ‘Disney’ backwards possibly a tribute to Walt Disney himself. Yen Sid was also one of Walt Disney’s alternate names. [1]

A powerful sorcerer, second to none. He tutored the King in magic.

From conjuring up skies full of beautiful butterflies to parting an ocean, Yen Sid’s feats of wizardry are…well, amazing. His name alone fills some folks with awe.

Yen Sid shared some of his wisdom with Sora and his friends. He also taught them some valuable techniques to help prepare them for what they’ll face on this new quest.

The great sorcerer first appeared in the Fantasia short The Sorcerer’s Apprentice as Mickey Mouse’s master. He was the owner of a magical hat (which he wears in Kingdom Hearts II) that is apparently the source of his power. In the movie’s most acclaimed sequence, Mickey steals the hat and begins to play with its magic. But, as he was warned by Yen, it goes out of control because Mickey cannot control the extent its magic. Yen Sid arrives and manages to stop the magical chaos with his own powers.

Yen Sid serves as Sora’s tutor to what lies ahead of him in his journey. He lives in a large tower in a small world-of-sorts connected to Twilight Town via a Magical Train. He dwells at its top, where he studies the Nobodies and Organization XIII. When Sora, Donald and Goofy arrive, he tells them of the enemies that they will face in the near future (Nobodies, Heartless and the Organization). He also returns to them their Gummi Ship and the co-ordinates to Hollow Bastion.

It is unknown what happens to Yen Sid and the three fairies, Flora, Fauna, and Merryweather. The last we see of Yen Sid is after the gummi ship is returned to Sora, Donald, and Goofy, and he vanishes. The last seen of the three fairies is when Maleficent’s cloak is brought to the tower and they decide to tell Yen Sid about this. Later on if you visit the tower, it is overtaken by Nobodies (more specificly, Berserkers, Dancers, Dusks, Dragoons, and Gamblers), and neither Yen Sid or the fairies are anywhere to be seen. It is assumed, however, that he escaped to Traverse Town (if it still exists), Disney Castle or Hollow Bastion, though most likely in an unaccessible area in the latter two worlds, while the fairies either returned to the Enchanted Dominion, Aurora’s world, or followed Yen Sid to wherever he escaped.

He will make an appearance in the upcoming Kingdom Hearts prequel Birth by Sleep, which is placed a decade before the first game, as Mickey is seen wielding the Keyblade associated with him, the Star Seeker, and it is known that he was under Yen Sid’s apprenticeship at that time. 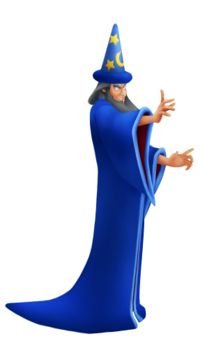