Yuffie is a character from Final Fantasy VII who makes an appearance in all Kingdom Hearts games. She travels with Leon, whom she refers to by his real name, Squall – this usually causes annoyance on Squall’s part. She sometimes refers to herself as the “Great Ninja Yuffie”, wielding a large wind-blade shuriken as her weapon.

A female ninja who escaped to Traverse Town when her home world was taken by the Heartless. She stays strong and cheerful in any situation. She works with Leon and Aerith to unravel the secret of the “key”.

A girl whose cheerful personality belies her painful memories. When she was still young the Heartless robbed her of her home.

Never one to sweat the small stuff, Yuffie seems unfazed by her fuddled memory.

One member of the town’s Restoration Committee, a spirited girl who actively does her part to keep tabs on the town.

Yuffie met Sora when she was living away from her hometown. Thanks to his help last time, the Heartless were ousted and she got to come home — so she’s very grateful to him.

Sora’s first meeting with Yuffie is in Traverse Town, shortly after he is defeated by Leon and dragged back to the motel. As he is still only semi-conscious, Sora mistakes her for Kairi and refers to her as such, leading Yuffie to remark that Leon “might’ve overdone it.” Yuffie does not play a significant role in the story, but she, along with Leon, was the one who told Sora about the keyblade while inside the Traverse Town hotel.

In the fight cups at Olympus Coliseum, Yuffie is fought numerous times by herself and alongside Leon. She fights primarily by throwing small shuriken and swinging her larger one as a weapon, but she is also able to recover lost health if she is not interrupted. 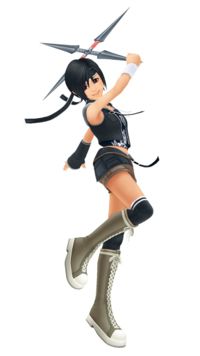